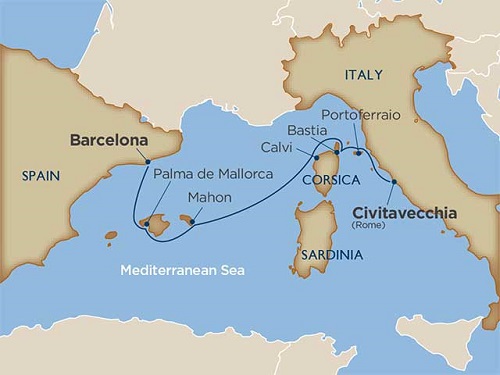 Day Barcelona, SpainArrives 05:00 AM
On the northeast coast of Spain, overlooking the Mediterranean, Barcelona is a vibrant port city, packed with centuries of iconic art and architectureGaudí and Picasso both called it homeand lined with sunny white-sand beaches. Explore the Catalan capital's tourist attractions and historic neighborhoods, Modernisme and world-renowned art museums, galleries and local crafts shopssome of which are centuries old and stock traditional Catalan wares. After you see the sights, there are lively tapas bars around every corner where you can stop for a drink, a café amb llet (Catalan for espresso with steamed milk) or a snack, no matter the hour. Green spaces for picnics, long walks and respite from the hustle and bustle are scattered throughout Barcelona's attractions: There's Gaudí's mosaic-decorated park, a neoclassical maze at the Laberint d'Horta, as well as plenty of high places (mountains, monuments and edifices) where sightseeing visitors can take in the view. A short trip from Barcelona by car or train, luxury outlets, cava wineries, a mountaintop abbey and the sandy beaches of the Mediterranean coast await.

Day Mahon, SpainArrives 08:00 AM Departs 10:00 PM
"Spain's Minorca is a small island with a big port. The natural deepwater harbor at the capital, Mahón (also called Maó), is the largest in the Mediterranean, and second largest in the world after Pearl Harbor. Over the millennia, that harbor has made Minorca an attractive base for seafaring powersfrom the Romans 2,000 years ago, to the British 300 years ago. In fact the British moved Minorcas capital from Ciutadella de Menorca to Mahón, precisely because of the latter's superior port. The British influence is still evident in Mahón today, and not just in the citys colonial-style architecturethere's even a small-batch gin distillery. Travelers can explore the intriguing Museum of Minorca and La Mola Fortress, along with a handful of markets, shops and tapas bars. The entire island is easily toured from one end to the other. Take a day trip to Ciutadella de Menorca to see the historic capital, and drive to the top of Monte Toro for great views and a visit to the islands patron saint. Archaeological sites like the Cala Morell Caves and Trepuco offer glimpses of the ancient civilizations that once thrived here. " 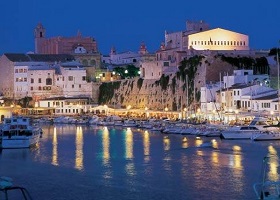 Day Calvi, FranceArrives 08:00 AM Departs 06:00 PM
"On Corsicas northwest coast, the port town of Calvi is steeped in heroic tales. It was here in capturing the massive Genoan-built citadel that Admiral Horatio Nelson famously lost his eye. Today, the town still houses a French Foreign Legion regiment. Lined with cafés, bars, boutiques and souvenir shops, the Quai Landry is the place to start your visit with a stroll past pleasure yachts docked in the marina, and where a stop for ice cream belongs on the agenda. The former stone salt tower on the water cant be missed, nor can the Baroque Santa Maria Church in the lower town with its pink facade. In the summertime, the city puts on a popular jazz festival with concerts throughout town and nearby. Calvi is graced by several miles of beach, and a short excursion through evergreen shrubs out to the headland on the Gulf of Revellata takes you to a mid-19th-century lighthouse and marine research center. Its the perfect setting for a picnic, with the ocean before you and the snow-capped mountains of the interior as a backdrop. " 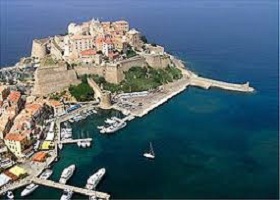 Day Bastia, Corsica, FranceArrives 08:00 AM Departs 10:00 PM
Filled with heart, soul and character, the bustling old port of Bastia is a good surprise. Sure, it might not measure up to the sexy style of Ajaccio or the architectural appeal of Bonifacio, but it has an irresistible magnetism. Bastia is an authentic snapshot of modern-day Corsica, a lived-in city thats resisted the urge to polish up its image just to please the tourists. 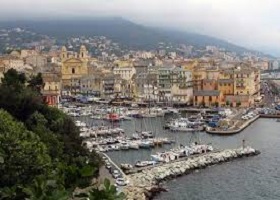 Day Portoferraio (Elba), ItalyArrives 07:00 AM Departs 05:00 PM
Despite its small size, the island of Elba has been known since the beginning of recorded history. Called Ilva by the Ligurians and Aethalia by the Greeks, Elba passed to the Etruscans and later the Romans. It was ruled by Pisa in the Middle Ages, was a haven for Barbary pirates in the 16th century and then privately owned by the powerful Medici family. The island's most famous resident was Napoleon Bonaparte, whose first exile from France and short reign over Elba lasted from May 1814 to February 1815. During that time, Napoleon was able to improve the island by altering street plans, building new roads, modernizing agriculture and developing the iron mines. 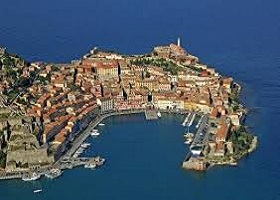 Day Rome, ItalyArrives 07:00 AM
"Rome is both a modern bustling city and an ancient open-air museum. You can walk in the footsteps of emperors, have coffee in Renaissance piazzas and see contemporary art all in one afternoon. Your sightseeing time in Rome begins at the nearby port of Civitavecchia, a seaside town with roots that stretch back to the Etruscan era. Take note of the Forte Michelangelo (both Bramante and Michelangelo had a hand in its design), and the lungomare, a lively stretch along the sea with beach clubs, bars and restaurants. Once in the Eternal City you can fill your day with museums, churches, archaeological sites, traditional trattorias, artisan shops and, of course, gelato. The Colosseum and the Vatican Museums are Rome's superstar attractions, but there are plenty of quieter gems to explore. For food lovers there are the markets in Campo de' Fiori or the slightly farther flung Testaccio. The hip neighborhood of Monti, next to the Colosseum, has a vibrant piazza scene and boutique shopping, while the Villa Borghese offers a green oasis with a view towards Saint Peters Basilica and the masterpiece-filled Galleria Borghese. Although Rome might not have been built in one day, you'll certainly be able to see the highlights and top things to do in Rome in 24 hours. "