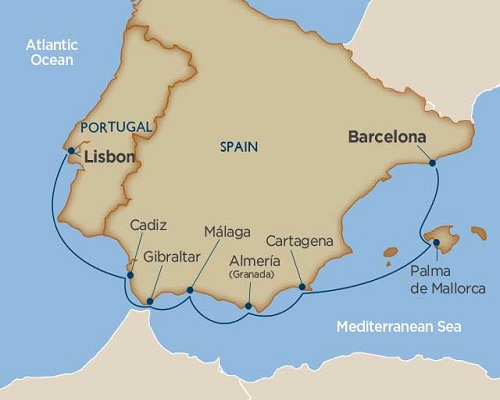 Day Cartagena, SpainArrives 07:00 AM Departs 12:00 PM
"There are more than two millennia of history to embrace in this port city in Spain's southeastern Murcia region. While Cartagena is famously home to the second-largest Roman amphitheater on the Iberian Peninsula, the city is much more than just spectacular ancient ruins. In addition to Cartagenas architecturealong with that amphitheater, there are striking Art Nouveau buildings, neoclassical churches and ultramodern edifices throughout the cityyoull find many opportunities to shop for local and regional artisan wares. In the city, investigate the restored medieval fortress looking out on the bay from the citys highest point. Or take a short trip by car or bus to the historic Agrupa Vicenta Mines, the remarkable palm forest at Elche and the holy city of Caravaca. "