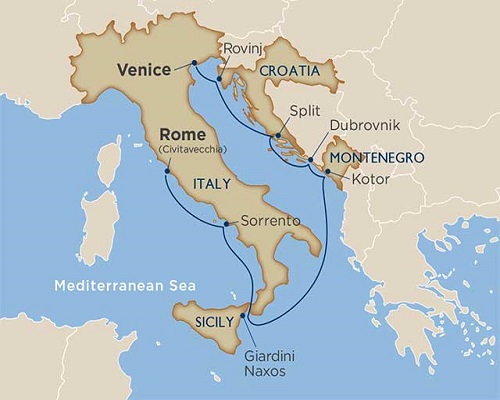 Day Venice, ItalyDeparts 06:00 PM
"When I went to Venice, my dream became my address," wrote Lord Byron, just one of many famous figures who found a haven in this fantasy city. This enchanted land was built on stilts, set into the water by ancient Venetians seeking refuge from the harsh realities of landlocked life. And Venice, Italy still offers a palpable feeling of escape from the real world today. When you cruise into the lagoon and step onto what passes for solid ground, you'll still be very much on the water. Venice is a floating labyrinth of reflections, with mirror and glass sights everywhere, from glorious Venetian architecture echoed in the canal waters to the marble palaces that shimmer in the sky. And although Carnivale is only held once a year, being in Venice on any day is like going to a festival with plenty of vibrant things to do and attractions to see. Locals seem to love the many sightseeing visitors who arrive each year, and Venice will openly reveal her charms even to those who are only here for a few hours, an afternoon or a magical evening.

Day Rovinj, CroatiaArrives 08:00 AM Departs 04:00 PM
Rovinj used to be a tiny island until the channel was filled in during the 18th century, so while the red terracotta roofs now spill inland, the Old Town is tidily self-contained. Hints of Italy are everywhere  in the signs, in the language, in the cuisine  thanks to having spent more than 500 years under Venetian rule. Romantic, quaint, and captivating, its Istrias most beloved town.

Day Split, CroatiaArrives 08:00 AM Departs 05:00 PM
"Croatias second-biggest city oozes small-town charm, thanks to its quaint, narrow streets and the easygoing lifestyle that the Dalmatians are known for. With a busy ferry port, Split is the point of access to the many islands up and down the coast. Much of its old town is within the walls of Diocletian's Palace, a 1,700-year-old UNESCO-listed fortress on the Adriatic seafront. Roman Emperor Diocletian built the palace as his retirement home on the sea and through the centuries many conquerors have taken refuge within its thick walls."

Day Dubrovnik, CroatiaArrives 08:00 AM Departs 10:00 PM
On the southern end of Croatia's Adriatic coast, Dubrovnik staked its claim to glory during the 450 years it existed as the independent Ragusan Republic, shoulder to shoulder with mighty forces like Venice and the Ottoman Empire. Once a renowned seafaring, shipbuilding and trading center, today it's an enchanting tourist destination. Dubrovnik seduces sightseeing visitors with its polished (and very clean!) limestone streets, theatrical architecture, charming cafés, welcoming restaurants and distinctive shops along scenic side streets. The natural backdrop, much of which is protected, consists of pine and cypress forests and the shimmering Adriatic, dotted with uninhabited islands. Visitors quickly discover that the wider Dubrovnik area is just as striking as its main attractionthe Old Town.

Day Kotor, MontenegroArrives 08:00 AM Departs 05:00 PM
"Cruising into the Bay of Kotor, youll be wowed by the dramatic beauty of this coastal Montenegrin town. Dreamy seafront villages are set to a backdrop of mountains plummeting into the Adriatic Sea, while the stone labyrinth of the Old Town is filled with medieval architecture and historic monumentsas well as the narrowest street in the world. The area only became part of Montenegro after WWII, and as such has a very different history to the rest of the country. Kotor escaped Ottoman rule and developed as an important Venetian trading post, before being conquered by the Austro-Hungarian Empire, France and Russia. The city pays tribute to this dynamic history with Venetian gates, Napoleons theater and Austrian prisons all waiting to be discovered. Theres a reason it was named a UNESCO World Heritage Site."

Day Giardini Naxos, ItalyArrives 08:00 AM Departs 04:00 PM
This harbor on the eastern shore of Sicily near Messina gives us close access to the fabulous Greco-Roman ruins of Taormina, as well as the active volcano Mt. Etna. The temples, streets and large amphitheater of Taormina make it one of Italys premier ancient sites. Its location overlooking the sea and with the backdrop of snow-capped Etna complete the package and make it among the most famous attractions in the Mediterranean region. Giardini Naxos itself boasts a lovely beach at Lido Europa, and intrepid visitors can climb Mt. Etna to see a volcano close up.

Day Sorrento, ItalyArrives 08:00 AM Departs 03:00 PM
Sorrento, perched picturesquely on a plateau above the sea with spectacular views over the Bay of Naples, has been a popular tourist destination for almost two centuries. Traditionally the town is one of the favourite resorts of British visitors to Italy, and over the last few decades it has ruled as Italy's leading package-holiday destination for English-speakers. The historic seaside town has learned to live with, and make the most of tourism, and in return it offers a classic 'Mediterranean summer holiday' atmosphere - but without losing all of its Italian character and charm. The key attraction of Sorrento is that it can offer a variety of holiday experiences to suit different visitors, from rural walks through lemon and olive groves to a choice of excursions by land or sea.

Day Rome, Italy / Disembark and Head into RomeArrives 07:00 AM
In this enchanting city the past and present intersect in perfect harmony. Casually intermingled among ancient ruins and majestic cathedrals are the trappings of a modern metropolis: Skyscrapers,cafes, boutiques selling designer footwear. But of course what you seek first in the heart of Rome is its breathtaking history. A good place to begin is the Vatican, with its Sistine Chapel and St. Peterâs Basilica. Works by Bernini, Michelangelo, Caravaggio, and Raphael are just a few of those on display, any one of which is worth hours of contemplation. Then the ancient ruinsâColosseum, Forum, Circus Maximus. And of course the Trevi Fountain for the obligatory coins promising your return to the Eternal City.

Disembark the ship and board a motor coach for the Eternal City. Your guide will take you on a local fruit and vegetables market tour, explaining the Roman lifestyle and street food. Discover the picturesque and hidden corners of Rome next to the most glorious temples and fountains of the Roman and Papal times, while sampling some local delicacies such as pizza or gelato! The Roman Street Food experience is a foodieâs dream. Then drive to your hotel and get settled with the evening at your leisure to relax in your room or walk around central Rome (Includes overnight at the Hotel Savoy ) 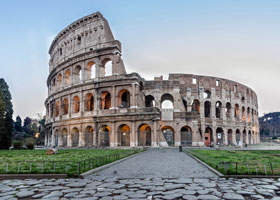 Day In the Heart of the Eternal City
Breakfast is included at your hotel. This is your morning to enjoy a historic tour. Meet your guide at the hotel and set off to the Colosseum where you will visit and learn about the expansion and organization of Rome at the time of the Emperors. Approach the Forum and see a valley full of temples and ancient buildings reminiscent of the ancient city that lives below the modern one. Follow your guide underground to San Clemente Basilica and see the amazing excavations of this former temple turned into a Catholic church. Enjoy some free time for a cappuccino or snack before moving to the Vatican City for your tour of the Vatican Museums and Sistine Chapel. You will enter the museums by means of a skip-the-line reservation and you will admire the greatest collection of works of art with the help of an informative guide. Enter the world-famous Sistine Chapel where the masterpieces of Michelangelo Buonarroti live - such as the glorious fresco painting of the Last Judgment - a truly intense moment. (Includes overnight at the Hotel Savoy and breakfast.)

Day Check out and Transfer
Breakfast is included. Check out and transfer to the airport according to your flight schedule. (Includes breakfast and airport transfer) 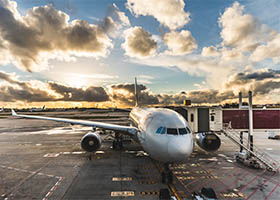