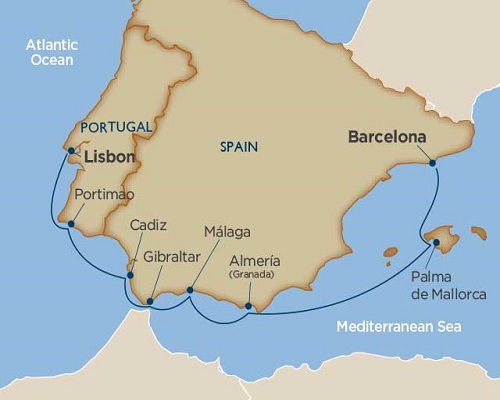 Day Portimao, PortugalArrives 09:00 AM Departs 05:00 PM
With a population of almost 40,000, Portimão in Portugal's Algarve region, is one of the country's largest coastal towns. Its perennially sunny climate, beautiful beaches and historic buildings make it a tourist destination in its own right. The Bio-park Monchique is famous for its abundance of flora and spectacular views. Off shore, fishing and dolphin spotting make for exciting pastimes. 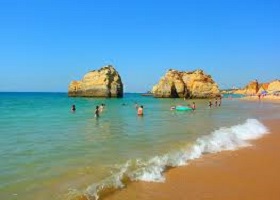 Day Cadiz (Seville), SpainArrives 07:00 AM Departs 10:00 PM
"Hanging off the southwestern edge of Spain, Cádiz is one of Andalucías regional capitals and a place bursting with personality. Europes oldest continually inhabited city, with a history stretching back 3,000 years, has fallen on hard times in recent years, but a combination of pride, good humor and stoicism keeps it on an even keel. The famous Carnival, one of Spains most important in the genre, is a thrilling fiesta into which Cádiz pours all its energy and ingenuity. The citys fond nickname, la tacita de plata (""little silver cup""), alludes to its curious geographyit juts out on a long peninsula into a sheltered bay. Old town Cádiz is a warren of cobbled streets where the houses, painted white or dusty ochre, have the weather-beaten look of a place subjected to centuries of wind and salt. This ancient city has one good example of everything that matters: a great food market, a theater (the Teatro Falla, a grand Art Nouveau Moorish gem), a gorgeous cathedral, impressive fortifications and a beachthe picturesque and famous La Caleta. "

Day Gibraltar, British TerritoryArrives 09:00 AM Departs 09:00 PM
"Strategically located at the southern tip of Europe, facing Africa, Gibraltar offers a fascinating mix of cultures. With a history that includes Moorish, Spanish, Italian, Portuguese and English influences (among others), this tiny, 6.7-square-kilometer British Overseas Territory is most famous for the giant Jurassic limestone rock soaring above the territorys main commercial and residential areas. The Rock contains an abundance of history (military and otherwise), not to mention significant flora and fauna, and a labyrinth of caves and tunnels. Venture into Gibraltars densely populated streets for Spanish, British, Middle Eastern and Italian cuisine, as well as tax-free shopping on everything from luxury brands to handmade arts and crafts and artisanal edibles. Browsing and snacking around town is the perfect chance to hear Yanito, the singsong Spanish-English hybrid spoken here. There are also historic and holy places in Europa Point, and the Museum of Gibraltar provides an opportunity to learn about the regions history and prehistory, as well as the migration habits of its birds and marine life. "

Day Almeria (Granada),SpainArrives 08:00 AM Departs 10:00 PM
Founded by the caliph of Cordoba, this Andalucian city on Spains southeast coast is a reminder of the regions Muslim history. The Alcazaba, a massive fort, dominates the city and affords amazing views. Also worth experiencing are the cathedral and the Almeria Museum. East of the city is the rugged, desolate Cabo de Gata-Nijar coast, a protected area. To the west is the resort area of Roquetas de Mar, featuring vast beaches.

Day Palma de Mallorca, SpainArrives 08:00 AM Departs 05:00 PM
"Palma de Mallorca, the largest city and capital of its own island as well as the entire Balearic archipelago, is one of Spains most delightful towns. Despite its proximity to tourist beaches where millions of Europeans take summer vacation, Palma maintains the traditional rhythm of a Mediterranean city: busy food markets, open-air terrazas for lazing and grazing and the Passeig del Born, perfect for an evening paseo (stroll) under its canopy of trees. But the city is also, increasingly, a hub of contemporary culture and cuisinewitness the old towns buzzing gallery scene, and cutting-edge restaurants like Simply Fosh and Aromata. If location is all, Palmas peerless setting, at the center of a glorious sweeping bay, counts for a great deal. The city has its own beaches and a working harbor where a state-of-the-art new marina, Moll Vell, has brought back locals to stroll and gawk at the giant yachts. "

Day Barcelona, SpainArrives 08:00 AM
On the northeast coast of Spain, overlooking the Mediterranean, Barcelona is a vibrant port city, packed with centuries of iconic art and architectureGaudí and Picasso both called it homeand lined with sunny white-sand beaches. Explore the Catalan capital's tourist attractions and historic neighborhoods, Modernisme and world-renowned art museums, galleries and local crafts shopssome of which are centuries old and stock traditional Catalan wares. After you see the sights, there are lively tapas bars around every corner where you can stop for a drink, a café amb llet (Catalan for espresso with steamed milk) or a snack, no matter the hour. Green spaces for picnics, long walks and respite from the hustle and bustle are scattered throughout Barcelona's attractions: There's Gaudí's mosaic-decorated park, a neoclassical maze at the Laberint d'Horta, as well as plenty of high places (mountains, monuments and edifices) where sightseeing visitors can take in the view. A short trip from Barcelona by car or train, luxury outlets, cava wineries, a mountaintop abbey and the sandy beaches of the Mediterranean coast await.