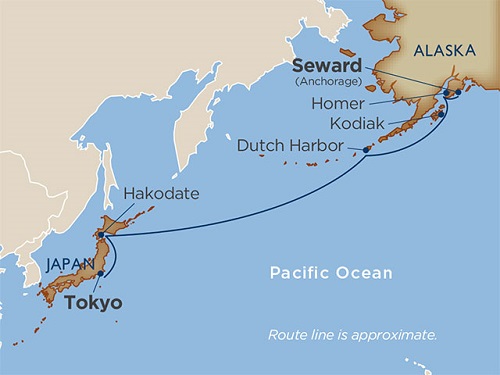 Day Tokyo, JapanDeparts 07:00 PM
There are so many interesting things about Tokyo it is not possible to list them here and you will want to plan to extend your stay. This is the place for excellent and unlimited shopping choices and from where new fashion trends seem to spring. It offers excellent cuisine and has earned mention on the UNESCO Intangible Cultural Heritage List. Even though Tokyos neon-lit streets make it seem modernistic, it also prides itself on retaining its shogun past, carrying on sumo tournaments and kabuki productions. Tokyo is also committed to providing green spaces in the city or on the outskirts, quickly reached by train.

Day Hakodate, JapanArrives 01:00 PM Departs 10:00 PM
"If Japan ever had a wild west, it was Hokkaido. Oh, all the classic movie stuff of samurai bashing each other with swords never made it this far north, but the image of the Westopen spaces, places to disappear, actual land horizons (which no other island in Japan has)lingers. 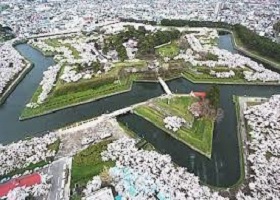 Day Cross International DatelineArrives 12:00 AM
Ships crossing the international dateline either lose or gain a calendar day depending on direction. Your captain will decide how to adjust and you will be informed on board. 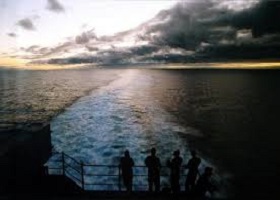 Day Dutch Harbor, Alaska, USArrives 08:00 AM Departs 03:30 PM
"The volcanic Aleutian Islands stretch between the United States and Russia in the Bering Sea. The archipelagos largest community goes by two namesUnalaska and Dutch Harborthough you may hear really old-time Aleut speakers say Ounalashka too. Want to sound like one of the fishing ports 4,300-odd residents? Just stick with Dutch. 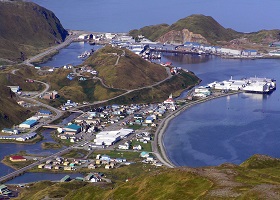 Day Kodiak, Alaska, USArrives 01:00 PM Departs 08:00 PM
Kodiak is all about bears. And what bears! This unique subspecies named for the Kodiak Archipelago where they are found evolved in isolation for around 12,000 years and can reach heights of 3 meters, or 10 feet, when standing on their hind legs. One of the worlds largest carnivores, the bears have a diet that goes far beyond meat (they can sleep for up to eight months, then wake up ravenous to feast predominantly on grass, plants, berries and fish). About 3,500 live on this tiny island, meaning you have a great chance of seeing one, if not many, from May through October! 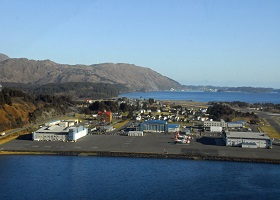 Day Homer, Alaska, USArrives 09:00 AM Departs 05:00 PM
This plucky little town sells End of the Road certificates to visitors whove motored here to the furthest reach of the Kenai Peninsula. Its something worth celebrating: a drive down the worlds longest street that protrudes into the ocean! But walkers, bikers and in-line skaters can also experience the thrill, thanks to a 6.5-kilometer-long (four-mile-long) paved multiuse trail.

The rich fishing grounds here attracted Native Alaskans centuries before Captain James Cook claimed the Kenai Peninsula for Britain in 1778. After some Russian tyrannyfur traders forced Native Alaskans to hunt sea-otter pelts for themHomer got a proper start as an English-settled coal-mining town in the 1890s. 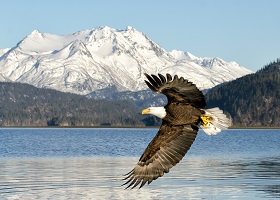 Day Seward (Anchorage), AlaskaArrives 08:00 AM
One of Southcentral Alaskas oldest communities, Seward is ground zero for the Klondike Gold Rush's Iditarod National Historic Trail, a dogsled route that connected the Kenai Peninsulas ice-free port with Nome during frontier-era winters. Though the modern race makes a ceremonial start in Anchorage, its inspired by the famous run of 1925, which dashed along parts of this older path. It allowed 20 mushers to carry urgently needed diphtheria vaccine more than 1,000 kilometers (621 miles) in just over 127 hours. Natives and explorers from Russia, Britain and the United States all frequented this area before Sewards official founding in 1903. The early settlement included a colorful neighborhood known as Homebrew Alley which was erased by a 9.2-magnitude megathrust earthquakethe second most powerful ever recordedwhich dropped the shoreline nearly six feet in 1964. Today this mellow town welcomes visitors to Resurrection Bay and Kenai Fjords National Park, not to mention the 204-kilometer (127-mile) Seward Highwayhonored as an All-American Roadstretching north to Anchorage. In town, favorite stops remain the Alaska SeaLife Center, a research aquarium open to the public, and the steep, stony 920-meter (3,018-foot) Mount Marathon, which hosts one of Americas oldest footraces each Fourth of July.