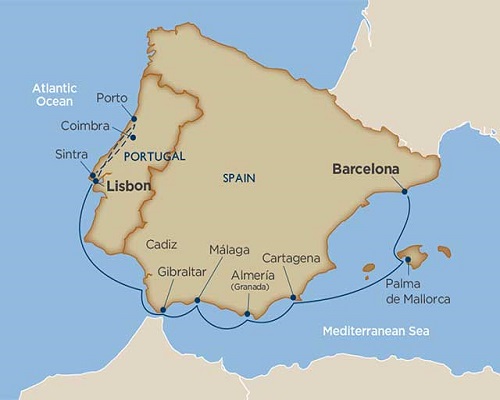 Day Lisbon, Portugal
"Lisbon, the capital of Portugal, is a wealth of sights, tastes and sounds. An ensemble of neighborhoods both old and new, its a city full of history, culture and tradition. After the devastating earthquake that struck in 1755, reconstruction began and the rebuilt Baixa area quickly became one of the city's busiest districts. From there, you can glance up at São Jorge Castle on one hill while in another direction you'll find Chiado, one of the trendiest and most elegant neighborhoods. The spirit of Lisbon can be encapsulated by the soulful musical genre, fado, which can best be enjoyed in the Alfama, the city's oldest neighborhood. Enter one of the area's old-school taverns and listen to passionate renditions of Fado Vadio, sung by amateurs, often after a round of aguardiente, an anise-flavored liquor."

Day Lisbon - Fatima - Porto, Portugal
Breakfast at the hotel and begin the morning touring in Lisbon. Enjoy a sightseeing tour to Lisbonâs major highlights â take a tram ride passing the Old Quarter and walk through the tiny squares and alleys of Alfama and a visit to the Belem monumental area and Jeronimos Monastery, declared a UNESCO site. Continue to Fatima in central Portugal, for an included Portuguese lunch and a visit to this important Europe pilgrimage center. Your last stop will be Porto, Portugalâs second largest city, beautifully settled near the mouth of Douroâs river. Check in at the hotel followed by some free time. Early evening includes a tapas dinner at a local tavern, free time and overnight at the Pestana Porto A Brasileira Hotel. 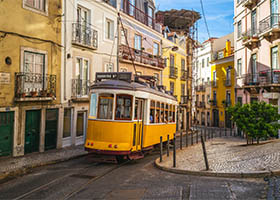 Day Porto and Douro, Portugal
Enjoy breakfast at your hotel before your sightseeing tour of Porto highlights âwalk Aliados Avenue, see the S. Bento Train station and Porto Cathedral ending at Ribeira Quarter, with free time on your own and/or lunch (not included). Drive towards PinhÃ£o, the heart of the Douro wine region. Stop at Viewpoint Casal de Loivos, considered one of the most beautiful viewpoints of the area. The Douro Valley, an 18th century demarcated wine region, encloses one of the most spectacular landscapes in Portugal. Board a traditional Douro River âRabeloâ boat and visit the local Quinta do Bonfim (or similar), to learn about Port wine history and its production methods and have a memorable wine tasting accompanied by some appetizers. Drive to RÃ©gua, check in to Quinta da Pacheca Wine Hotel, where dinner is included with your overnight 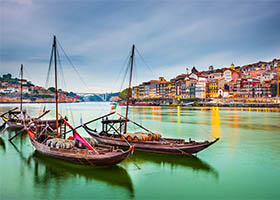 Day Douro, Coimbra, Sintra, Portugal
Breakfast is ncluded at the hotel. Drive for about 2.5 hours to Coimbra known as the student's city, located in central Portugal close to Mondego River. Visit the Coimbra Old University, UNESCO recognized as a heritage site since 2013. Enjoy some time at your leisure before heading to Sintra from Lisbon through a protected forest with narrow streets and stunning 19th century Romantic architecture. Overnight at Sintra Boutique Hotel, with free time to enjoy the village known for its numerous historic palaces and castles. 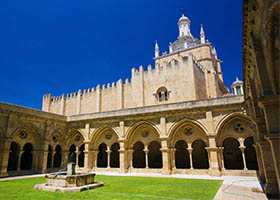 Day Pena Palace, Cascais, Lisbon, Portugal / Lisbon, PortugalDeparts 07:30 PM
Start your day with breakfast at the hotel and spend the day discovering the splendid Sintra Pena Palace. The fabulous and impressive Pena Palace sits immersed in a stretch of woody terrain in the park of the same name. Associated with Portuguese discoveries, the palace was built to reflect a scene from an opera and erected to celebrate the sighting of Vasco de Gama's returning fleet from his explorations. Continue to the town of Cascais and enjoy some leisure time at the historical center of cobblestone streets, lavish mansions, interesting museums and an imposing fort. Drive to Lisbon, pass by the town center, charming Liberty Avenue and Rossio Square, and pause on the way for tasting the famous pasteis de nata (Portuguese egg custard tarts) before the arrival to the pier and your waiting Windstar ship.

The rhythm of Lisbon invites you to join its captivating dance. This splendid capital city on the banks of the Rio Teja offers a warm welcome and an unparalleled blend of architectural styles. Elegant outdoor cafÃ©s line the cobbled sidewalks. Turn-of-the-century funiculars climb the scenic hills. Find the UNESCO sites of the Tower of Belem and the Monastery of the Hieronymites. And, everywhere, the city engages you with its easy style and remarkable charm. 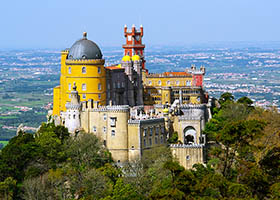 Day Gibraltar, British TerritoryArrives 08:00 AM Departs 06:00 PM
"Strategically located at the southern tip of Europe, facing Africa, Gibraltar offers a fascinating mix of cultures. With a history that includes Moorish, Spanish, Italian, Portuguese and English influences (among others), this tiny, 6.7-square-kilometer British Overseas Territory is most famous for the giant Jurassic limestone rock soaring above the territorys main commercial and residential areas. The Rock contains an abundance of history (military and otherwise), not to mention significant flora and fauna, and a labyrinth of caves and tunnels. Venture into Gibraltars densely populated streets for Spanish, British, Middle Eastern and Italian cuisine, as well as tax-free shopping on everything from luxury brands to handmade arts and crafts and artisanal edibles. Browsing and snacking around town is the perfect chance to hear Yanito, the singsong Spanish-English hybrid spoken here. There are also historic and holy places in Europa Point, and the Museum of Gibraltar provides an opportunity to learn about the regions history and prehistory, as well as the migration habits of its birds and marine life. "