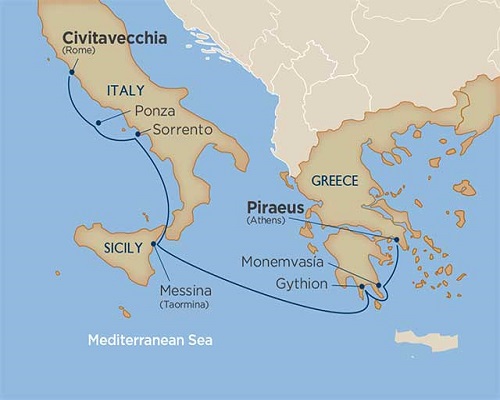 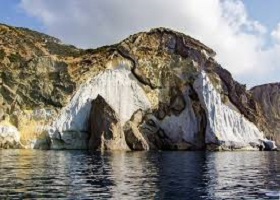 Day Sorrento, ItalyArrives 07:00 AM Departs 05:00 PM
Sorrento, perched picturesquely on a plateau above the sea with spectacular views over the Bay of Naples, has been a popular tourist destination for almost two centuries. Traditionally the town is one of the favourite resorts of British visitors to Italy, and over the last few decades it has ruled as Italy's leading package-holiday destination for English-speakers. The historic seaside town has learned to live with, and make the most of tourism, and in return it offers a classic 'Mediterranean summer holiday' atmosphere - but without losing all of its Italian character and charm. The key attraction of Sorrento is that it can offer a variety of holiday experiences to suit different visitors, from rural walks through lemon and olive groves to a choice of excursions by land or sea.

Day Messina (Taormina), ItalyArrives 12:00 AM Departs 05:00 PM
Gateway to Mt. Etna, the awe-inspiring and still-active volcano, the seaport of Messina is the third-largest city in Sicily. Known for its fine cathedral, museums and for its rich Sicilian wines, Messina and the surrounding area was also the location for much of the Godfather series of films. An afternoon or a day in Messina can include a drive up to the windswept side of Mt. Etna (hold on to your hatit is seriously windy here!) or to the shop-lined streets of Taormina. Many stores sell Sicilian ceramics, with colorful hues painted on volcanic earthen pottery, pieces created in the same way that they have been for centuries. Look also for jewelry and crafts made from beautiful black volcanic glass, collected from the slopes of Etna. 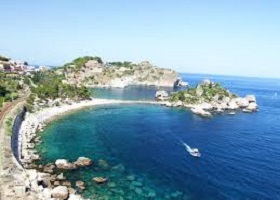 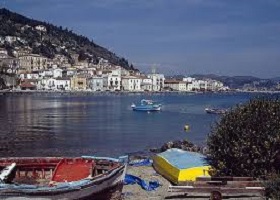