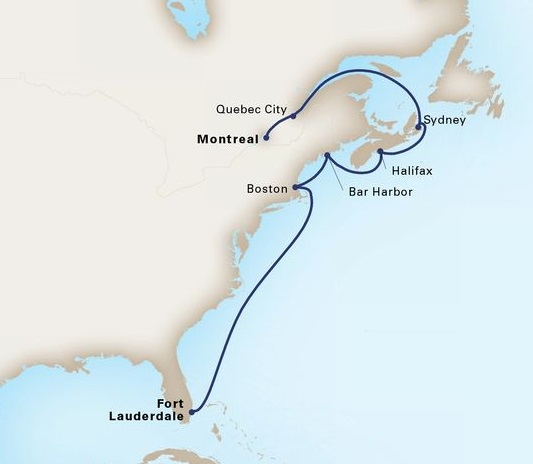 Day Fort Lauderdale, Florida, USDeparts 05:00 PM
"Shimmering blue waters, swaying palm trees and soft ocean breezes greet you in Ft. Lauderdale, Florida, where you'll find yourself somewhere between laid-back island time and the fast pace of a thriving city. In this sun-filled, year-round beach town, pristine beaches are the main attraction, shorts and flip-flops are the daily uniform, and yachts are often the preferred form of transportation. It's a place where you can do as much, or as little, as you desire. Because of its many canals and waterways, Ft. Lauderdale is sometimes called the Venice of America. It's home to the annual Fort Lauderdale International Boat Show, one of the largest in-water boat shows in the world. Visitors can easily get a taste of the area's nautical lifestyle by cruising the Intracoastal Waterway on an old-fashioned paddle wheeler. Other options include hopping aboard one of the popular water taxis or Venetian gondolas that glide down the historic New River, which flows right through town. "

Day Boston, Massachusetts, USArrives 10:00 AM Departs 06:00 PM
The ports of New England and eastern Canada bear witness to fascinating histories and vibrant cultures that continue to thrive to this day. Approaching these cities from the sea offers a memorable perspective: For many immigrants to North America, their first glimpse of their new lives would be from the decks of ships sailing into these harbors. While the fishing villages of New England and Canada's Atlantic Provinces embody a long seafaring tradition, neither region is frozen in time. World-class museums and celebrated restaurants sit side by side with historic sites. Whether you want to explore the early days of Canada and the United States or see what the future holds for their metropolises, a journey along North Americas Atlantic coast promises to be unforgettable.
Day Bar Harbor, Maine, USArrives 07:00 AM Departs 04:00 PM
"Located on Mount Desert Island in Maine, Bar Harbor is the quintessential New England coastal town. Picturesque and charming, it is a scenic and walkable town with streets lined with restaurants and boutiques. Dining on lobster is a must, as is a scoop or two at one of the towns homemade ice cream shops. Boat tours explore the waters and islands that surround Bar Harbor, with seasonal opportunities to see wildlifeincluding whalesand lighthouses along the way. Bar Harbor is surrounded by the magnificent Acadia National Park, making the area an adventurers playground. The park, which is celebrating its centennial in 2016, is home to sites such as Cadillac Mountain, the tallest mountain along the eastern coast of the United States and the first place in the country to see the sun rise. Guests can hike, bike or take a horse-and-carriage ride to explore Acadias lakes and striking coastline. Take advantage of the best bargain in Bar Harbor during your visit: The free Island Explorer buses take guests to Acadias major sites and to other nearby destinations. "

Day Halifax, Nova Scotia, CanadaArrives 09:00 AM Departs 06:00 PM
The ports of New England and eastern Canada bear witness to fascinating histories and vibrant cultures that continue to thrive to this day. Approaching these cities from the sea offers a memorable perspective: For many immigrants to North America, their first glimpse of their new lives would be from the decks of ships sailing into these harbors. While the fishing villages of New England and Canada's Atlantic Provinces embody a long seafaring tradition, neither region is frozen in time. World-class museums and celebrated restaurants sit side by side with historic sites. Whether you want to explore the early days of Canada and the United States or see what the future holds for their metropolises, a journey along North Americas Atlantic coast promises to be unforgettable.

Day Sydney, Nova Scotia, CanadaArrives 10:00 AM Departs 06:00 PM
"Sydney is the largest city on Cape Breton Island, which is linked by causeway to the rest of Nova Scotia. Sydneys attractions start at the harbor, where visitors can shop for locally made crafts and see the worlds largest fiddle, which towers beside the ports cruise pavilion. Some of the citys historic houses and churches date back to the 1700s and 1800s and are open for tours. Restaurants often provide live music (expect fiddles and sea chanteys) along with meals of seafood fresh-caught in nearby waters. Sydneys galleries give visitors a chance to meet local artists and purchase their work. Cape Breton's natural wonders include the spectacular scenic drive known as the Cabot Trail. Hikers in Cape Breton Highlands National Park will find stunning vistas around every turn, while a boat ride on massive Bras dOr Lake, which is ringed by wild hills, offers a different perspective on the province. Explore the regions past with a visit to the Fortress of Louisbourg National Historic Site, and learn about the areas First Nations communities at Membertou Heritage Park. If you decide to go deep underground at the Cape Breton Miners Museum, your tour guide is likely to be a man who toiled for years in the island's coal mines and has many stories to tell. Another must-see: the Alexander Graham Bell National Historic Site, where the famous inventor made his summer home. "

Day Quebec City, Quebec, CanadaArrives 08:00 AM Departs 05:00 PM
"Few places in North America are as steeped in history as Québec City, Canada. Older than Jamestown and founded before the Pilgrims landed at Plymouth Rock, it is the only city north of Mexico whose original fortifications remain intact. The Québec City historic district, a UNESCO World Heritage Site, is still home to religious orders and hospitals that date back to the 17th century. Its Place-Royale would look familiar to the explorer Samuel de Champlain, even with its modern attractions of gift shops and cafés. On the Plains of Abraham, you can walk the battlefield where, in 1759, the French forces under General Montcalm were decisively trounced by the British, led by General Wolfe. The British took control of all of New France within a year of that 1759 battle, but even so French culture still lives on here in Québec City. More than 95 percent of Québec City's population speaks French as its first language, though it's easy to sightsee and navigate the city in English. As you tour the museums and historic sights of Québec City that celebrate Québecois history and dine at restaurants that serve its distinctive cuisine, you'll discover a remarkable culture that has survived and thrived into the 21st century. "